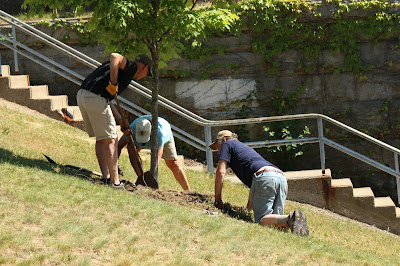 In the Spring of 2012, a dozen GreeningRozzie volunteers planted new trees in Roslindale to help reduce the carbon footprint of our community and make an open space greener. The City of Boston was offering young trees to community groups through “Grow Boston Greener” grants. GreeningRozzie identified the Roslindale Village commuter rail station as a site, coordinated with the MBTA, planted trees on both sides of the station, and called for volunteers to help water the young trees.

I adopted a newly planted crab apple tree and promised to water it regularly. Other neighbors did the same, bringing water to the commuter rail station site for the first two years after the trees were planted.

It took some dedication for volunteers to water regularly, since water had to be carried to the commuter rail site. I started saving plastic milk jugs and juice bottles and filled them with water collected in my basement dehumidifier. A few years later I installed a rain barrel outside my house, and filled jugs with rain water for the young crabapple tree.

The GreeningRozzie Memory Tree Project grew out of this initiative. Pam Sinotte, who organized volunteers to water the trees, developed the Memory Tree concept and gained the endorsement of the City of Boston Parks Department in an ongoing effort to encourage city residents and businesses to water street trees.

For the first few years, with regular watering, the young trees at the train station grew well and started to become established. After four or five years, however, several of the trees started to show signs of stress, exacerbated by a severe drought in the summer of 2016.

In the Spring of 2018, GreeningRozzie invited arborist Jen Kettell to evaluate the trees at the commuter rail station site. Jen recommended several measures that could help the trees survive, including continued regular watering, and building berms for the trees planted on sloping ground to limit rain water runoff.

In June 2018, GR organized a work session at the commuter rail station site to start making the improvements Jen recommended. 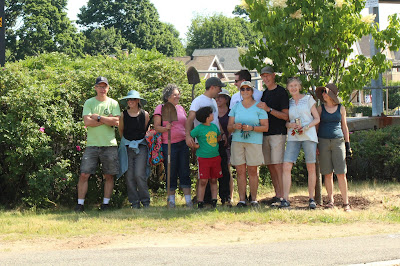 More than a dozen volunteers worked together for a few hours on a hot early summer afternoon. We accomplished a lot! We cleared grass and weeds from around the bases of ten trees, added compost and mulch, and thoroughly watered the trees. 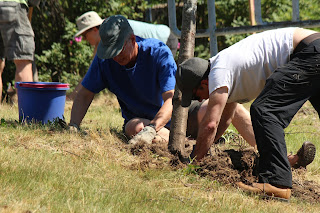 Using donated wood and his experience as a skilled carpenter, Brian Cartwright built a wooden berm on the downward slope side of a small oak tree. The volunteers built temporary berms for other trees using sod and rocks found at the site. 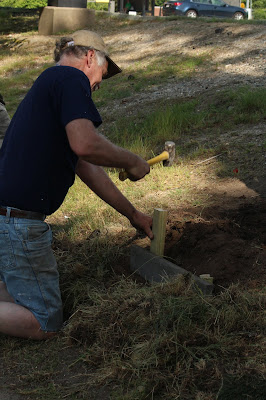 Roslindale neighbors worked along with volunteers from Speak for the Trees, a non-profit organization dedicated to supporting street trees in and around Boston. We also gratefully welcomed our neighbors from Roslindale Green and Clean, who volunteer regularly to maintain gardens in other public spaces in Roslindale. And the School for Modern Foreign Languages, across from the train station agreed to allow occasional access to its outside water faucet for watering the trees at the station site.

We’ve learned a lot about the challenges of maintaining new trees in a public space.
Regular watering is hard to maintain without access to outside water faucets. Trees planted on slopes need regular maintenance to reduce competition from weeds and minimize rainwater runoff. Trees situated in open public space also need protection from mowers and wildlife.

We’ve also started to learn that it is important to think about what kind of trees we plant, especially in the context of climate change. Native trees and plants support a much higher number and greater diversity of insects, including pollinators that are especially important for organic gardening.

Claudia Thompson, founder of Grow Native Mass and a guest speaker at the Roslindale Branch Library in March 2018, noted that populations of migratory birds are in decline; native plants and trees are needed to support the insects that these birds rely on to feed newly hatched baby birds.

Planting native trees reduces the carbon footprint of our community, and the trees support other species as they struggle to adapt and survive on a warming planet.

The work that we do now will improve the long-term survival of young trees.

GreeningRozzie is planning the second annual work session at the commuter rail station for June 2019. Our goals for this year’s event are to weed, mulch and water the trees, find volunteers to water through the summer, and build wooden berms for 3 or 4 more trees that are planted on slopes. If you are interested in joining the effort, let us know and we’ll make sure to contact you.

As we think about what we can do at the community level in the face of climate change – a global threat that is overwhelming – it’s a challenge to stay hopeful.

But the small steps we take, like supporting trees, will make a difference.

Here are some resources that can help guide our local work:

Speak for the Trees is launching a project to inventory 12,000 street trees in Boston in 2019. They are recruiting partners from community groups around the city, and training volunteers. SFTT has developed an open tree map data base.

At the GreeningRozzie community meeting in December, Boston Water and Sewer project manager Kate England provided an indepth presentation on green infrastructure that’s being added across the city, including at a street intersection and a school in Roslindale.

In the discussion after the meeting, which included City Councilor Michelle Wu, people raised questions about the types of trees used for street trees and local green infrastructure projects.

The Boston Parks and Recreation Department, where city arborists oversee management of street tree planning, maintains a list of approved trees that residents can request to be planted in spaces in front of their houses.

Join GreeningRozzie as we work with local elected officials to advocate for a change in Parks Department policies and practices. We’d like Boston arborists to prioritize planting with native trees and add more natives to their approved street tree list.
Posted by GreeningRozzie Blog at 4:25 PM No comments:

Email ThisBlogThis!Share to TwitterShare to FacebookShare to Pinterest
Newer Posts Older Posts Home
Subscribe to: Posts (Atom)
GreeningRozzie is a community organization in Roslindale, Massachusetts.
Our mission is to make Roslindale a greener, more sustainable, and more cohesive community.